On the last week of half term, Thorn Grove’s year 5 classroom was taken over by Ancient Greek Gods and Goddesses! They didn’t seem to know that Thorn Grove had its own uniform and instead arrived in traditional Greek clothing – long white robes, sandals and wreaths of leaves around their heads.

They began the morning by making beautiful clay pots carved with pictures and repeated patterns which told stories of the Ancient Greek myths.

In the afternoon the Gods and Goddesses had a party, learning and enjoying the traditional Zorba The Greek dance. It involves standing in a line as a group and performing the same moves in sync. It gets faster and faster as the dance goes on! Here are some people in Greece performing the same dance: 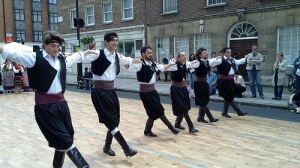 The day was rounded off with a Greek food tasting session where a selection of foods were tasted and rated. Houmous, feta cheese, olives, cous-cous, Greek bread and the pizzas and tzatziki that had been made in the morning were among those on the menu.

After a fun-filled day of learning, Thorn Grove were sad to say goodbye to the Ancient Greeks, but glad to see the smiling faces of the year 5 class return the next day.